Catsmo Is Committed to Sustainable Seafood 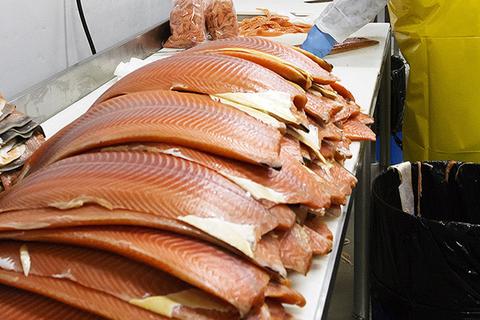 As more consumers have made the effort to move away from meat, the demand for fish—and salmon in particular—has steadily grown. It’s easy to see why, salmon is high in protein, low in calories, and contains healthy fats that help to lower the risk of heart disease and improve brain health. But at what cost to the environment?

Like the enormous negative impact that raising cattle and hogs has had on our planet’s terrain and air, the world’s oceans, lakes, and rivers are also feeling the strain of our appetite for protein. Overfishing has pushed our ocean’s fish stocks ever closer to their natural limits while consumer demand continues to rise. This worldwide overfishing has led to an increase in fish farming or aquaculture.

Today, more than 50 percent of all seafood produced for human consumption is farmed, and this number is only expected to increase. Estimates are that by 2030 nearly two-thirds of seafood will be farm-raised. In 2013 the Aquaculture Stewardship Council released a set of standards fish farms must meet to be certified as sustainable and in 2004 the World Wildlife Fund began developing their own detailed standards to help aquaculturists better understand their roles in helping to sustain the health and bounty of the world's salmon population.

Responsible fish farms focus on producing a greater variety of fish with the least negative impact on the environment. To meet the demand for good-quality protein, seafood markets are going to have to rely more on aquaculture. Our world’s natural fish stocks are gradually becoming depleted and we can’t keep taking from them without replenishing them.

While there is a lot of debate on whether wild-caught or farm-raised is better for the environment, both come with their pros and cons. In addition to the general decline of fish populations, one concern with traditional fishing is that the gasoline-fueled fishing boats do their own share of polluting of our waters both with fuel run-off and the dumping of refuse. Also of great concern is the harvesting of fish and sea life that are inadvertently caught in the process of targeting one species of fish over another.

But not all fish farms follow the rules of responsible aquaculture. Some farm-raised salmon are fed a diet that’s made from ground-up wild fish which hinders replenishing efforts intended to help improve the wild fish stocks. Also common, although not in the United States, is the use of antibiotics and pesticides in fisheries. In countries that don't adhere to responsible aquaculture practices, the fisheries don’t treat the fish waste properly leading to contamination of the waters surrounding the fish farms. Catsmo won't work with such farms. Catsmo will only source its salmon from fish farms that follow the standards of responsible aquaculture and are certified sustainable.

The US aquaculture industry has made huge improvements in adhering to sustainability standards and Castmo recognizes that without improving aquaculture we won't be able to meet the demand of consumers in the very near future.