How to Buy, Defrost, Cook, and Serve Langoustines 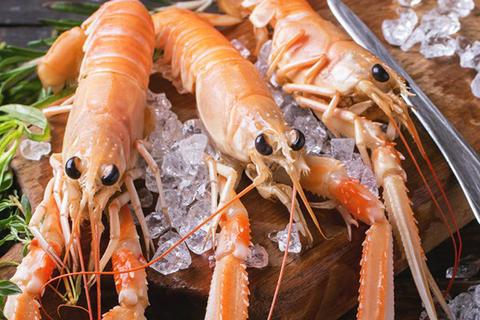 Langoustines have a pure and delicate taste; some argue the langoustine is even more delicious than lobster. Considered by many seafood connoisseurs as ‘the finest of all crustacea’, the langoustine is the prawn’s posh cousin. Pricier than prawns, langoustines are actually a relative of the lobster, but they don’t grow nearly as big. Nine or ten inches is considered the high end for a langoustine.

Langoustines are sometimes referred to as Norway lobster—they were originally found in Norway—Dublin Bay prawns, or scampi; though in the USA ‘scampi’ is also the name given to a shrimp dish in Italian-American cooking.

The langoustine is slim, orange-pink in color and resembles a very large prawn. The flesh, when cooked, is white, sweet and succulent. The shell retains its attractive color once cooked making it all the more appetizing when presented at the dinner table.

Where do langoustines come from?

Langoustines live in salty seas, not fresh waters. Solex Catsmo’s delectable langoustines come from the west coast of Scotland—over 50% of the langoustines eaten in the world come from Scotland, while others are fished from the chilly waters of the northern Atlantic and the North Sea. They can be found as far north as Iceland and northern Norway, and south to Portugal where langoustine is a popular choice for special occasions.

Why is the langoustine considered a luxury?

The langoustine fits squarely into the luxury food category for a number of reasons all of which have a direct affect on the price of the desirable langoustine.

Firstly, the simple theory of supply and demand means that strict langoustine fishing quotas are constantly challenged by the popularity of langoustines for the table in Spain, France and other European countries.

And thirdly, langoustines don’t make happy travelers. In close quarters they destroy one another and even when accommodated separately they deteriorate quickly. The measures taken to ensure speedy ‘catch-to-consumption’ contribute to the langoustine price regardless of whether the delicacy is delivered alive or frozen.

Fresh or frozen? How to buy langoustines in the USA

Langoustines do not inhabit the extensive coastlines of North America, and as we’ve already mentioned—they do not travel well. Your chances of walking into a fish market and buying a live, or ‘fresh’, langoustine in the USA is infinitesimal.

While buying fresh seafood is generally the goal of the discerning chef, when it comes to buying langoustines in the USA—frozen is even better. That seems counter-intuitive, but when you consider that Solex Catsmo langoustines are fast-frozen while still on the fishing vessel in icy seas, within hours of being caught, you’re treating yourself to seafood that’s fresher than many of the 'fresh' langoustines served in European restaurants!

How to defrost frozen langoustines

Langoustines can perish fast, both before freezing and after defrosting. So ‘speed-to-heat’ is your friend when working with langoustines.

The BEST way to defrost langoustines: Place the wrapped langoustines in the refrigerator about 12+ hours before you plan to use them. This will allow them to thaw slowly while staying perfectly chilled. Rinse the defrosted langoustines in a bowl under running water, and drain. Pat them dry on a clean paper towel and they’re ready to cook!

The FAST way to defrost langoustines: Place the langoustines in a bowl of cold water under a slow-trickling cold tap. Remove them the moment they're defrosted—about 10 to 15 minutes—as leaving langoustines to stand in tepid water will ruin the integrity of their firm flesh.

Once defrosted, cook them on the same day. Ideally you should plan your thawing to coincide with your cooking time so your langoustines go straight from freshly thawed to the heat.

When you buy langoustines frozen never freeze them again once you've defrosted them.

How to prepare langoustines for cooking

There are three popular ways to prep langoustines for cooking. This video describes two of them very well:

1. For the grill: Split the langoustine into two pieces right down the middle. Remove the ‘sandbox’ and the vein, and you’re ready to go.
2. For scampi, pasta, curries and salads: Twist the tail and separate it from the head. Twist the tail again to break the join between the 3rd and 4th tail segment and ease the tail meat out, ready to chop into bite-sized portions.
3. The third method enables you to ‘butterfly’ the langoustines: Lay the langoustines flat on a chopping board and, with a sharp knife, saw through the shells lengthways cutting three-quarters of the way through. Splay them open and baste them with your favorite basting sauce or butter.

How to cook langoustines

Rule #1 of cooking langoustines—don’t overcook them! Your langoustine will become tough when cooked too long. You’ll know your langoustines are done when the translucent meat becomes white and opaque, and this can happen in under a minute depending on your cooking method.

Here are some rules of thumb

One of our favorite comments on the brevity of cooking langoustines comes from Rowley Leigh, a British chef, restaurateur and journalist and self proclaimed langoustine purist:

“…I will also countenance a plate of langoustines that have been split in half and briefly shown a hot grill.”

How to serve langoustines

There’s no shortage of complex and sophisticated langoustine recipes scattered across the internet, but if you want to experience the delicately-flavoured langoustine at its best we recommend you simply split them, grill them and enjoy them with a twist of fresh lemon and a splash of top quality olive oil. A dab of regular, wasabi or garlic mayonnaise will kick them up a notch. They can be enjoyed chilled, warm or at room temperature.

Langoustines straight from the grill can be served piping hot with individual dipping sauces: garlic butter, lemon butter and chili butter make a great combo. Give each dinner guest their own set of tiny sauce bowls and you’ll have a feeding frenzy in no time at all! Crusty white artisan bread is mandatory.

Or, arrange the grilled langoustines on a large serving platter and sprinkle generously with chopped garlic and flat-leaf parsley, a squeeze of lemon, and salt and pepper.

Langoustines are excellent in paellas with shrimp and clams, added to curry, or chunked over seafood pasta. Cold, they make an indulgent salad.

How to eat langoustines from the shell

One word—fingers. Digging the tail meat from the shell is the most sociable way to enjoy langoustines and everyone should be prepared to get their hands dirty. Each guest should have a small personal finger bowl filled with warm water and a slice of lemon at hand, along with a bottomless pit of paper napkins to clean their fingers.

In the USA most people eat only the tail, but it’s worth learning the European way. Snap the front claws off the body and place a little mayonnaise or sauce inside the head. Next, mix it with the head meat using a claw, scoop it out and slurp it down. If your langoustines are large enough the claws can be snapped in half and the sweet meat sucked out.

It ain’t over till it’s over

The beauty of the langoustine is that not a morsel need go to waste. If you don’t serve the heads they can be boiled up to make a glorious seafood stock or bisque. Same goes for the discarded shells and legs.

Buy your langoustines right here and we’ll ship them overnight >